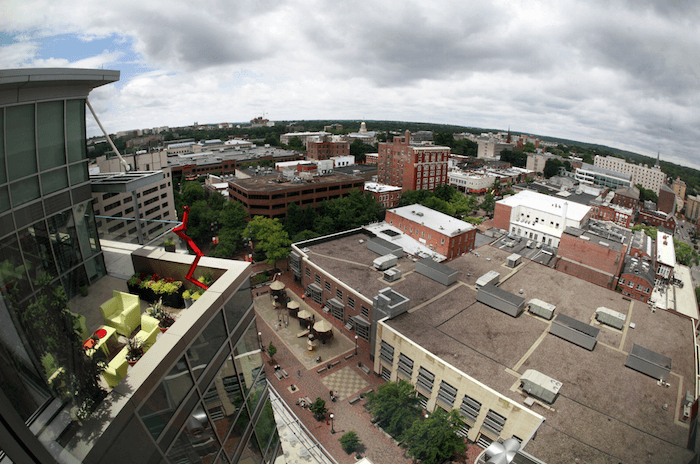 Managing parking in a municipal environment has its unique challenges, and the City of Iowa City, Iowa, is no different than any other city in that respect. In this case, in addition to managing parking for its 62,000+ residents each year, thousands of students stream into the University of Iowa, and since the downtown area and the university campus are basically intertwined, the city faces some of the same issues many large universities encounter. To help overcome these challenges, the City of Iowa City partnered with T2 Systems, a leading provider of parking management solutions for both municipalities and colleges and universities.

Before engaging T2 Systems, the City of Iowa City managed all city parking with a “hodgepodge of different systems” explained Chris O’Brien, Director of Transportation Services for the city. Separate homegrown databases for permits, citation processing and finance were used. On-street enforcement consisted of 12 year old handhelds and the access and revenue control systems, including hardware, for the garages were well over 15 years old. In general, the systems as a whole were outdated and needed some upgrading.

In 2008 O’Brien began making sweeping changes to the old way of doing things by implementing the T2 Flex™ parking management system. With T2 Flex, the city’s permits, enforcement activities, citation processing and its financials were now managed with ONE system. O’Brien also migrated the old online payment system over to a T2 eBusiness Solution. Now any payment made on the web for citations “would instantly tie into T2 Flex rather than us having to push information through an interface.” O’Brien explains that when they first implemented online citation payments they were seeing about 300 transactions, roughly $2,300 per month. However, that quickly increased and the city currently sees about 3,000 transactions, nearly $44,000 per month.

More positive changes came in 2009 when the city expanded its T2 Flex system to include Access and Revenue Control functionality. At that point the city was using the enterprise version of T2 Flex – unifying all aspects of the city’s parking operation within one system – a benefit O’Brien cannot stress enough.
“We went from 6 different systems down to having all of our parking operations flow through one software suite and this is a huge benefit. Having just one single system to maintain from a management standpoint has been ideal,” O’Brien said.

After implementing the Access and Revenue Control functionality in three of its facilities, the city realized immediate benefits from a customer service, efficiency, and revenue standpoint. The cashierless pay-in-lane credit card stations placed in the garages were a hit right from the start. “These allowed for quick transactions, with no cashier required. Customers loved them and initially 10% of our transactions were off those lanes.” O’Brien said. “Right now we are over 20% of the transactions working through those lanes.”

In addition to improving customer service, this functionality proved to pay for itself in less than one year. “We had two cashiers resign that we did not rehire but instead we bought 4 additional units. This was an $8,000 savings after we purchased the equipment.”

“Over 20% of our transactions utilize those units,” O’Brien said. “We’ve since had 3 additional cashiers resign and we have not replaced any of them and still doing the same amount – if not more – transactions. The savings we have had from not rehiring staff will cover the equipment costs in a relatively short period of time.”

In all, O’Brien is happy they made the transition to one system. “I don’t have to look in multiple systems to try to tabulate the data and pull it into one spreadsheet. It’s all right there at your fingertips.” And if an issue arises, “we are down to one system, one vendor; we make one call instead of having to coordinate between multiple vendors. This is a welcome change.”