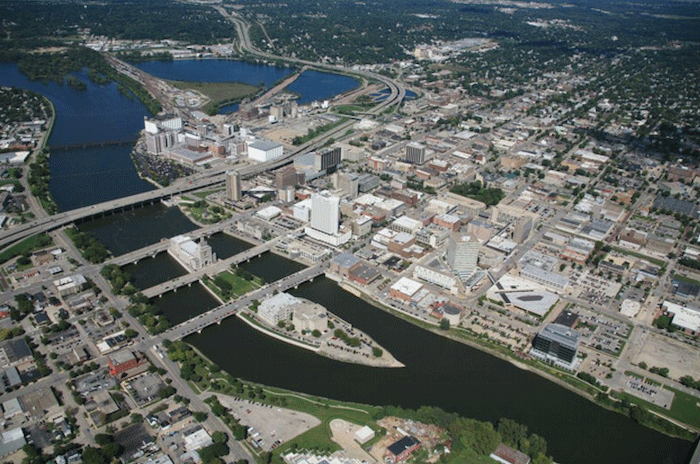 Cedar Rapids is the second largest city in Iowa and spans across both banks of Cedar River. It is a flourishing center for arts and culture in Eastern Iowa, as well as an economic hub of the state. Cedar Rapids is nicknamed the “City of Five Seasons,” for which the “fifth season” is the time spent enjoying the other four seasons.

In 2008, 31 feet of water flooded into the downtown area, covering 10 square miles, destroying infrastructure, and causing billions of dollars in damage. Though the city received FEMA money to help with the rebuilding process, it was not enough to fully revitalize the downtown core. In addition to experiencing a flood, the city had also been dealing with outdated single-space parking meters, which broke down frequently and increased maintenance costs. As the single-space meters were unable to accept credit cards, they increased labor costs associated with collections and were less convenient for consumers.

Cedar Rapids began looking into revenue-generating options and determined that implementing a new, modern parking system would deliver the most benefits as it would provide consumers with additional payment methods, offer businesses a validation method, and generate more revenue, which could then be invested directly back into the downtown recovery program.

The Vision and Goals: Revitalize the Downtown Core and the Economy

In 2011, the “Park Cedar Rapids” initiative was launched with a vision to enhance the downtown tenant and visitor experience while being a catalyst for economic development. The City of Cedar Rapids transferred management of the downtown parking system to Downtown Parking Management, Inc., (DPMI), which was tasked with overseeing the Park Cedar Rapids program as well as ensuring that the parking system overall was efficient, safe and customer-focused. DPMI also worked to foster the development of jobs and new business, support the local economy, and combat community deterioration through the successful supervision and improvement of public parking assets.

The Luke II parking meters were deployed with approximately one per block face, and operate in Pay-by-Space mode to provide consumer convenience and ease of enforcement. In so doing, the city has saved consumers from having to return to their vehicles and display receipts, and has also enabled enforcement officers to go specifically to unpaid parking spaces to see if a vehicle is present, rather than having to check each receipt on every dashboard.

Park Cedar Rapids spread the launch over a six-week period, which allowed it to spread out its labor force and work through any internal issues. It also enlisted ambassadors to promote the new parking system, handing out flyers about the new Luke II parking meters with helpful information for consumers.

Residents and visitors alike have expressed satisfaction with the new pay stations due to their easy interface and ability to accept payments in cash, credit cards, coupons, and pay-by-phone. Park Cedar Rapids estimates that 67 percent of transactions are made by credit card which is more than a 50 percent increase from previous years. Consumers have also noted that they like the networked capability of the pay stations that allows them to extend their parking session using any pay station in the downtown core.

Through various downtown outreach sessions Jon Rouse, general manager of Park Cedar Rapids, has found that many downtown business owners are also enjoying benefits from the new pay stations, due to the variety of payment options available as well as the ability to provide validations to customers. “One of the most important benefits for our downtown business owners has been the ability for them to provide validations to their customers with the coupon code feature T2 offers,” said Rouse. “We saw a 104 percent increase in validations from 2011 to 2012 and we’re happy to know that this unique feature has become so valuable.”

Although not all businesses use the coupon feature, many businesses like to pay for their customers’ parking. They, therefore, provide a coupon code before their patrons come downtown, which is paid for in advance. This can also be provided as a thank-you, following a purchase, to be used by patrons the next time they park downtown. Most recently, Park Cedar Rapids formed a partnership with the new library in downtown Cedar Rapids, whereby any patron can have their parking validated for up to two hours, as long as they are in good standing with the library. Overall, a total of 15 percent of transactions for Park Cedar Rapids come from coupon codes.

Results: Putting Revenue Back into the Community

In addition to a positive response from the public, the Luke II pay stations have translated into increased revenue. In 2012, Park Cedar Rapids’ net revenue increased 43 percent over the previous year and this growth is expected to increase over the coming years. As the new pay stations require less maintenance and collections, the staffing costs associated with managing them have also decreased. Park Cedar Rapids estimates that approximately $120,000 in operational costs have been re-allocated to other projects, which badly needed them, and has ultimately helped increase the profitability of this operation.

Improving the safety of the community was paramount to Park Cedar Rapids and revenue was used to install brighter and more energy efficient lighting, implement regular skywalk and parking ramp patrols, start a complimentary parking shuttle service, and hire security personnel to patrol facilities 24/7.
The project and the initiatives that resulted from its revenues, alongside the hard work that Rouse put into developing comprehensive maintenance programs and building a strong team, helped earn Rouse the International Parking Institute’s 2013 Parking Supervisor of the Year title.

By removing the inconvenience of coin-only parking meters and offering more payment options, Park Cedar Rapids realized that more people ended up paying for parking, which resulted in a great increase in net revenue, which could then be reinvested back into the city. Having one pay station per block also now means that Park Cedar Rapids has fewer parking meters to maintain. This leads to less maintenance and collection costs for the city.

Choosing to invest in parking meters that offered an easy to use interface, the ability to accept a wide range of payment options, and networked capability all combined to offer strong value to Park Cedar Rapids and an improved consumer experience for the city’s inhabitants and visitors. The effectiveness of the launch, including the helpful Park Cedar Rapids ambassadors program and flyers, meant that downtown business owners and visitors were all able to embrace the new Luke II pay stations. The city as a whole has now found that the net revenue generated has been able to revitalize and restore its beloved downtown.