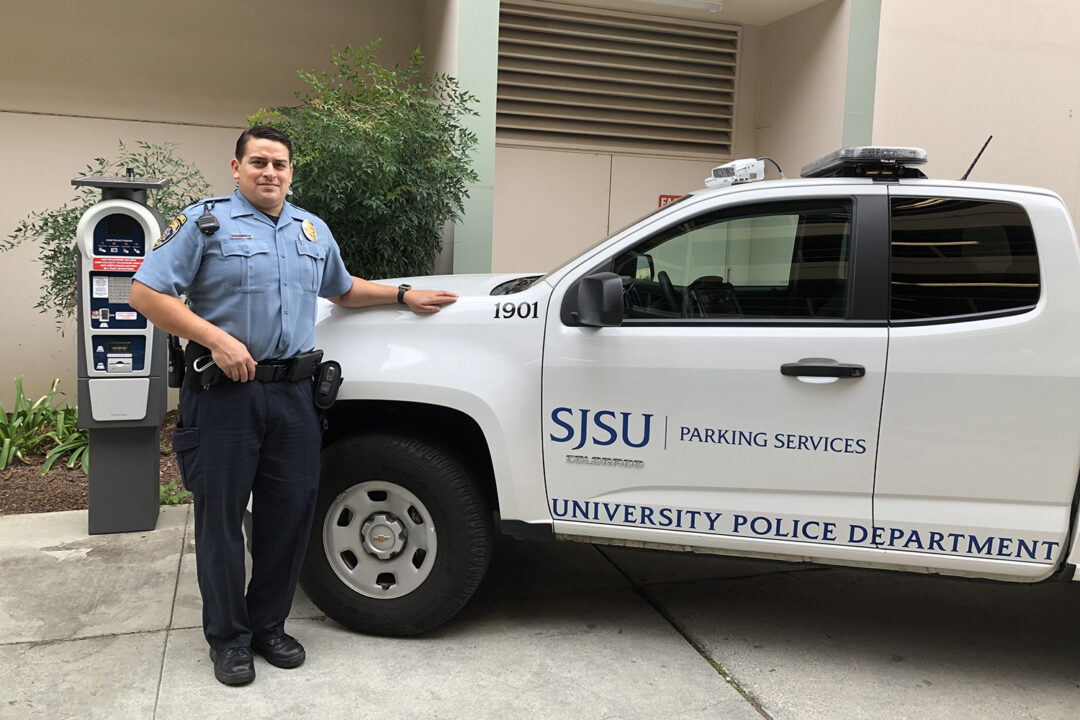 San Jose State University is “one of the biggest campuses that very few people have heard a lot about,” according to Eric Cross, Parking Services Manager. San Jose State is home to 36,000 students and another 4,000 faculty and staff that work in and around the campus. Located in the midst of Silicon Valley, the university has global technology leaders like Adobe, PayPal, and Cisco right in its backyard, with companies like Apple, Google, and Facebook not too far away.

It wasn’t always that way, though. San Jose State is actually the oldest public university in California – it was founded in 1857 and moved to its current location in 1871 – and downtown San Jose was built up around it. As the university and the city have grown together, parking has become very challenging for students, staff, and visitors.

With over 40,000 students, faculty, and staff and just over 6,000 parking spaces, there are bound to be some supply and demand issues. But beyond that, San Jose State’s biggest challenges were with compliance, misuse, and ease of use, as well as operational inefficiencies.

The university was issuing physical permits, which were liable to get lost in the mail, left at home or in another car, passed around between friends, and even forged, not to mention the burden placed on staff during permit sale season. Guests were also given physical permits that they would have to come pick up at the parking office, which could be on the other side of campus from their destination. San Jose State also had pay-and-display pay stations for short-term parking, but this proved cumbersome for parking patrons and difficult to enforce.

“Our officers were patrolling the garage on foot and just basically going by each vehicle and checking those vehicles,” explained Ngoc Nguyen, Systems Analyst. “Using that old system, our compliance rates were maybe 90% at max, so 10% of people were going to get away with not paying for parking.” 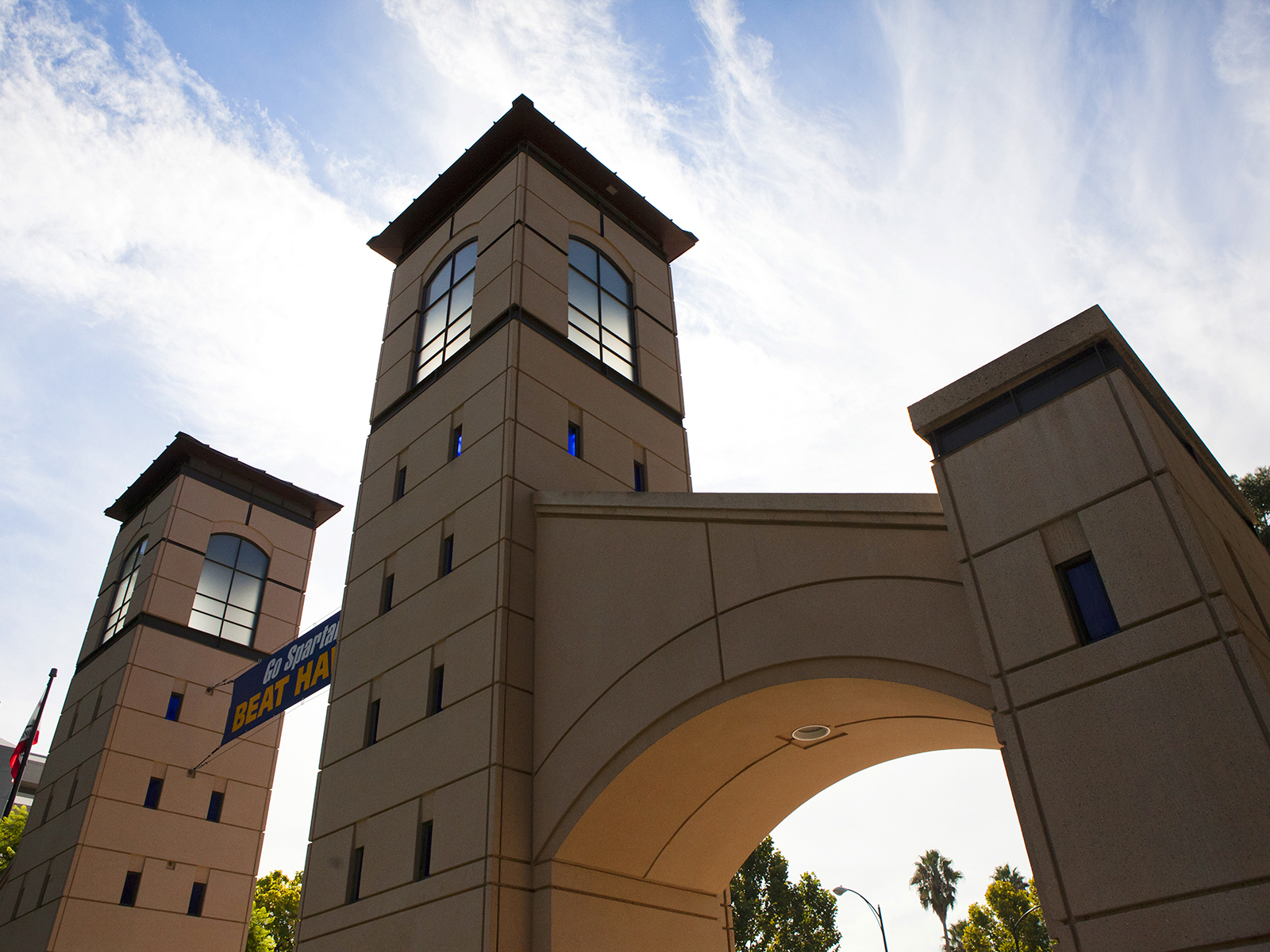 San Jose State’s biggest update was moving from physical to virtual permits. To purchase a virtual permit, students and faculty simply go online via the T2 FlexPort platform, enter their contact information and license plate number, and pay. Then, instead of receiving a hangtag in the mail or at the parking office, the permit holder’s license plate becomes their credential. San Jose State has also moved its guest permits virtual, and is using FlexPort to manage guest permit requests from internal departments.

Additionally, the university purchased T2 Luke II pay stations to replace their old pay-and-display meters. With Luke II, patrons simply approach the pay station, enter their license plate, pay with coins, cash, or a credit card, and go on their way. They can also use the Parkmobile app to pay using their smartphone and extend their time if needed.

The results? “I can tell you it is like night and day over what we went through last year,” Cross said. San Jose State has seen a significant increase in compliance thanks to the efficiency of their LPR enforcement system. Whereas previously it would take enforcement officers up to 3 hours to walk one garage, now it takes just 35 minutes, allowing them to do multiple checks a day. Additionally, to Cross’ surprise, citation numbers have gone down since implementing virtual permits and LPR. “More and more people are being more compliant and purchasing parking permits – you really don’t have an excuse for not having a parking permit.”

The switch to virtual permits has also helped tremendously with misuse. “There’s no more physical permits anymore for you to try to forge. Or you can’t just try to hand your permit off to somebody, because now your license plate is your parking permit,” Nguyen explained.

Parking at San Jose State has become much simpler and more user-friendly. Students and faculty no longer have to wait to receive their permit in the mail, worry about losing it, or remember to put it in their car. “We’ve gotten a lot of positive feedback about how easy it is now,” Nguyen said. Short-term parkers no longer have to go back to their car after paying to display a receipt or rush to the pay station to add more time, and guests are able to redeem their permits online and simply come to campus and park near their destination.

Lastly, virtual permits and LPR have greatly reduced the burden on San Jose State’s parking staff. “We were able to reduce traffic demand in the office by almost 24%, yet at the same time, we saw almost a 30% increase in sales. That includes removing 675 transactions that take place at our office,” Cross explained. They were also able provide virtual guest permits to nearly 6,000 incoming students for orientation this past summer by simply sending an email with a link to reserve online, whereas previously each permit would have to be mailed or picked up in the office. “We saved a tremendous amount of time and legwork, not just for our department, but also for the orientation team,” Cross stated.

“We were able to reduce traffic demand in the office by almost 24%, yet at the same time, we saw almost a 30% increase in sales.”
Eric Cross, Parking Services Manager

“You have to be well-prepared for this as well,” Ngyuen stated. “Before heading into this, we did our research. Actually, our plan began hatching probably six or seven years ago. And we finally pulled the trigger about two years ago. We really did our research, we really prepared ourselves.”

Cross and Nguyen also both recommend attending T2 events like Connect and ReConnect, where you can learn more about T2 solutions and talk to other T2 customers about their operations and experiences. As Cross put it, “You’re going to start to get to know folks who can be resources to you.”